Dublin, Irish Dubh Linn, Norse Dyfflin (“Black Pool”), also called Baile Átha Cliath (“Town of the Ford of the Hurdle”), city, and capital of Ireland, located on the east coast in the province of Leinster. Situated at the head of Dublin Bay of the Irish Sea, Dublin is the country’s chief port, centre of financial and commercial power, and seat of culture. It is also a city of contrasts, maintaining an uneasy relationship between reminders of earlier political and economic conditions and symbols of present-day life and prosperity.

Dublin’s geographic site is superb. Situated at the head of a beautiful bay, the city straddles the River Liffey where it breaks eastward through a hill-ringed plain to the shores of the Irish Sea. (The dark bog water draining into the river made the “black pool” that gave the city its name.) Almost certainly, this opening from the sea—leading through the mountains to the fruitful central plains of Ireland—originally attracted Viking raiders and Norse settlement. Each year the suburbs jut farther into the countryside, but to the south there is a natural limit posed by the Dublin and Wicklow mountains, which ring the city and provide some of its most beautiful vistas. Apart from the port area and the docks, Dublin is a low-built, steepled city, with few buildings dating from before the 17th century. The Roman Catholic churches are 19th- and 20th-century structures. The 17-story Liberty Hall (built 1961–65 as a trade-union headquarters), long Dublin’s tallest building, has been joined by a spate of new high-rise offices and apartments. Still, most of the buildings are no higher than 5 or 6 stories. 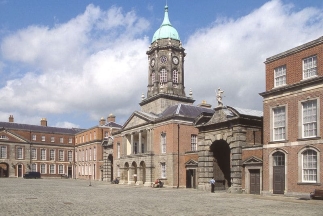